Ragi Millet has various names from all across the globe. This small food grain popularly known as Finger millet is also known as bulo (Uganda), nachini (Maharashtra), African millet, koracan, wimbi (Swahili) and ragi. The origin of this humble grain is believed to be from Uganda, or regions around that country, from where it was introduced to India about 3000 years ago.

Since it has served well the poor man, for it was then a staple food of farmers. It acts as a rich source of calcium and carbohydrates, and also proteins, trace minerals, iron, niacin (a vitamin of B-complex group), methionine (an essential amino acid). 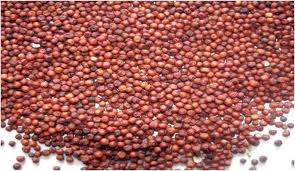 Ragi Millet
It is a part of everyday diet in many parts across the globe, be it in the form of ragi porridge, soups, mixed with the flour for rotis, desserts like halwa, mixed with the dosa/idli batter, it is one of the weaning foods for babies (6-7 months onwards) and is also a good wholesome diet for diabetics. Thus, offering the user with benefits which would normally accrue to milk and its products.The calcium it contains is easily assimilated and helps strengthen the bones, keeping osteoporosis away. 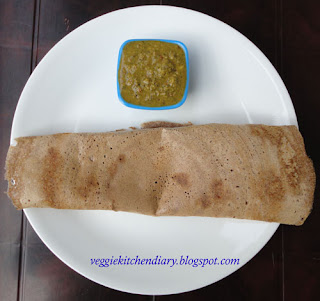 Ragi Dosa
If you like Dosa, then you will surely like this Ragi dosa too. I just used the regular dosa recipe but enhanced it nutritionally with Ragi flour. The taste is very similar to regular dosa though you get the hint of ragi while tasting it.

Method:
1.Soak the Urad Dal and fenugreek seeds for at least four hours. Then Grind it into a smooth batter.

2.Stir in the Ragi flour and salt. Set it in a warm place to ferment overnight.

3.To prepare Dosa, preheat a skillet. Pour a ladle full of batter right at the center of the skillet and spread it in a circular action starting from the center, fanning out to the edge of the skillet.

5.Once the Dosa is cooked it comes off the skillet pretty easily. Serve hot with the chutney of your choice.

Note: The batter stores well in the refrigerator for a week.
Posted by SreeLakshmi at Thursday, December 01, 2011